It’s statistics time again courtesty the Canadian Real Estate Assn (CREA) and PEIREA. Don’t worry though, there’s no test, but it is nice to know what’s going on with the market and how it can effect your decision about buying or selling your home! 🏡

Residential sales stood at 152 units in April, down 17.4% from last year which was a record, so it was on par historically with April sales. So far in 2019 sales on the PEI MLS have totalled 452 units. This is down 16% from last year and below 2016 and 17 as well, showing that the continued pressure from lack of inventory is having an effect on sales in the market on PEI. 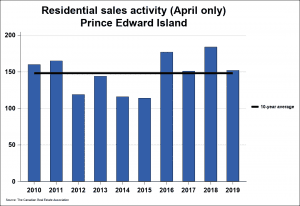 Speaking of inventory: 274 homes were listed in April, which is in fact up slightly from last year but well below historical trends for the past 15 years of records. Basically this means the supply of homes situation remains a problem for sure as there aren’t enough listings out there. As of the end of the month there were 845 home listings on PEI down 9% from last year and at 15 year historic lows! At the current rate of sales if no new homes came on the market from now on the supply would be gone in 5 and a half months roughly. 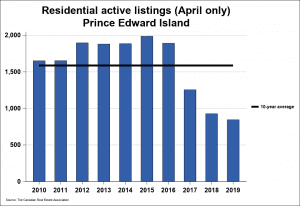 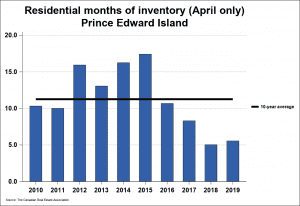 An important number the average price of a home on PEI in April was $235,694 up 2.1% from last year and also continuing a trend of gradual increase on the Island for the price of homes. This is due to a number of factors: the economy is doing relatively well and inventory remains low. 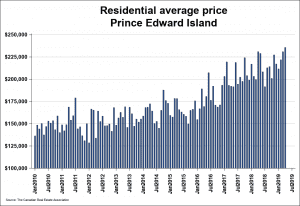 If you’re interested in selling your home now’s the time to do it as things get busy for the summer season. Contact any of our agents and they’ll be able to help you with the whole process from start to finish.