December/Year end data is now available from the Canadian Real Estate Association for the PEI housing market. Overall the trend for 2018 was a continuing decrease in houses available (inventory) versus historical numbers and an increase in average price throughout the year as a result.

The average home price in December was $214,044, up 6% from last December for the month. For the year however, the average price of a home in 2018 on Prince Edward Island was $211,598. This is up a more modest 4.1%, this rise could certainly be attributed to lower inventory & better employment numbers in PEI for the year. 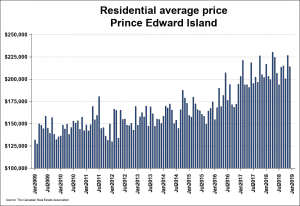 Compared to historical numbers the 92 units sold in December was above the 10 year average, and was actually the 3rd best December going back 15 years, but compared to the month last year there was a decrease of 17.9%. 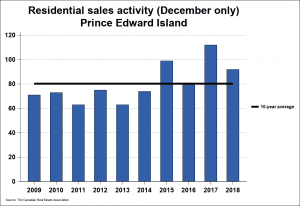 Overall for 2018 there were 2,050 homes sold on PEI. Which was down 4.6% from 2017. This number is also below 2016, but above every other year on record before that. It is really just numbers trending toward normal but still much higher than average. We will see what happens in 2019!

As has been the trend now for 3 years overall supply has trended lower and lower. This December was no different, only 77 new homes were listed on PEI for the month, that’s down almost 40% to the lowest level since 2002! On top of that there were 714 active home listings at the end of 2018, down 21.4% from 2017.

There is a great need for listings on the market, as inventory is at its lowest levels in 16 years due to strong demand. As of the end of 2018 there are 7.8 months of inventory on the Island down from last year and far below the historical average of 18! months. 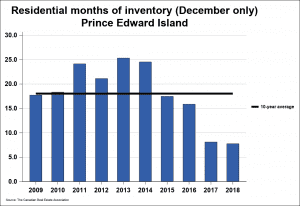 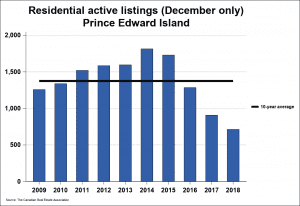 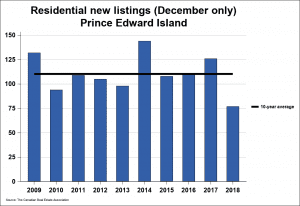 We see a trend to settling out in both demand and hence pricing.  More expensive homes in the Charlottetown area are even now seeing a flat demand.  Affordable housing, especially in the most populated cities, will continue to be in high demand.